Here’s a note from Glen regarding the final phase of the Liberty Street Protest.

Last night I was forced to finally take down the last remaining top row of signs at Russell’s 11th floor apartment at 114 Liberty street, across the street from the “Ground Zero” World Trade center site. The 6th and 7th floor signs were removed on September 10th as those floors residents moved back into their homes just one day before the 3rd anniversary of their leaving. Residents on the remaining floors have since also moved in and the final few are moving back in the next few days. Although Russell’s apartment remains vacant, the condo-board and management company made the request to take down the signs, since not all of the building residents liked their building being used as a “billboard” (even if we did get compliments from neighboring building residents who said they “loved coming home every night seeing the huge billboard for peace.”) At this point Russell also wanted to avoid problems with his old neighbors.

Though the signs were up way past our original ‘negotiated agreement’ it seemed as though after such a twisted election cycle and the fact that there is no let up in any of the wars being fought in our name, that perhaps no one would object to keeping them up indefinitely. But unfortunately this is not the case.

At first our greatest hope was to have the signs up through the Republican National Convention here in NYC. After legal efforts Russell made on my behalf for the signs to remain, and his right to have them displayed in his home, we convinced the condo-board and management company that we would work with them and they said they would be happier to work with us as well, rather than it getting ugly (although in the end we realized in the buildings ‘bylaws’ they did have the right to ask to re move the signs). So we all agreed the signs would stay up through the convention as long as the government kept their distance (the police requested removal once only – we did not comply and they did not come back), and those including the board president (who gave permission and participated in picking the signs for his 7th floor windows) were happy to go along with us.

Much time has since passed. In my typical relentless style, I kept on asking for more time since the country is going through such a difficult period, and since further residents had not moved back in. I was able to get more and more time out of them. Hoping that the election would have a different outcome, hoping that although Kerry talked about fighting a tougher war, that perhaps there was some light at the end of even his tough tunnel, we thought if Kerry actually won, it at least would not b e an ongoing war forever and ever (perhaps our idealistic or ignorant mistake,) and if the signs had to come down after the election it would not be sooo bad, even though I did tell Russell i wanted the signs to stay up until he sold the place or moved in (sadly figuring there would always be some war being fought somewhere that should be stopped in the foreseeable future.) But no suck luck….

So since the original signs went up in the middle of July, until just last night – that’s almost four months and probably millions of spectators at Ground Zero – I’ve got to convince myself we had a good run.

I thank you all for your participation and support.
I think it was a good thing to share with the world that came past or mentioned it to others.
Tourists, Local, National, and International press all took note.

I only wish you all could have seen it in person, because NONE of my pictures do justice to the impact those huge overbearing “NO WAR” letters had on anyone visiting the site, or who saw them all the way up Church street (if you knew where to look at night, you could actually see the letters from as far away as Canal street, over a mile away! And they were perfectly legible for several blocks above Chambers street, not to mention the 1000’s of legal and financial district offices that had a clear view 2 4 hrs. a day!)

Extra Special thanks to all the physical participators who actually went to the site with me and helped in one way or another; Vida, Chris, Shepard, Blythe, Kenny Lee, Cara, Craig, Kurtis, Derric (fabricated the actual signs) and the Simmons family. 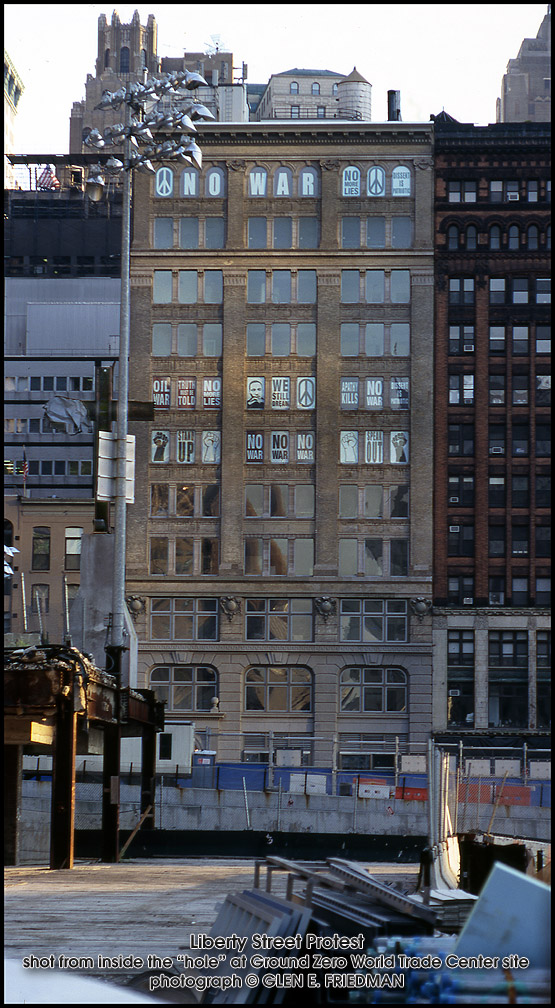 p.s. I couldn’t just go away too quietly… Without permission I’ve decided to leave, with backlights, the last two, least obtrusive signs on the upper far right anyway! we’ll see what if anything happens…. 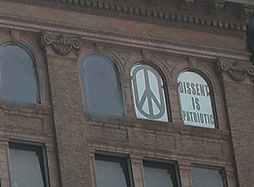 These two signs actually remained until the beginning of 2007 when they were removed by the new owner of the apartment, after the newly elected Democrats took over the House of Representatives and the Senate as a repudiation of the Bush war in iraq.