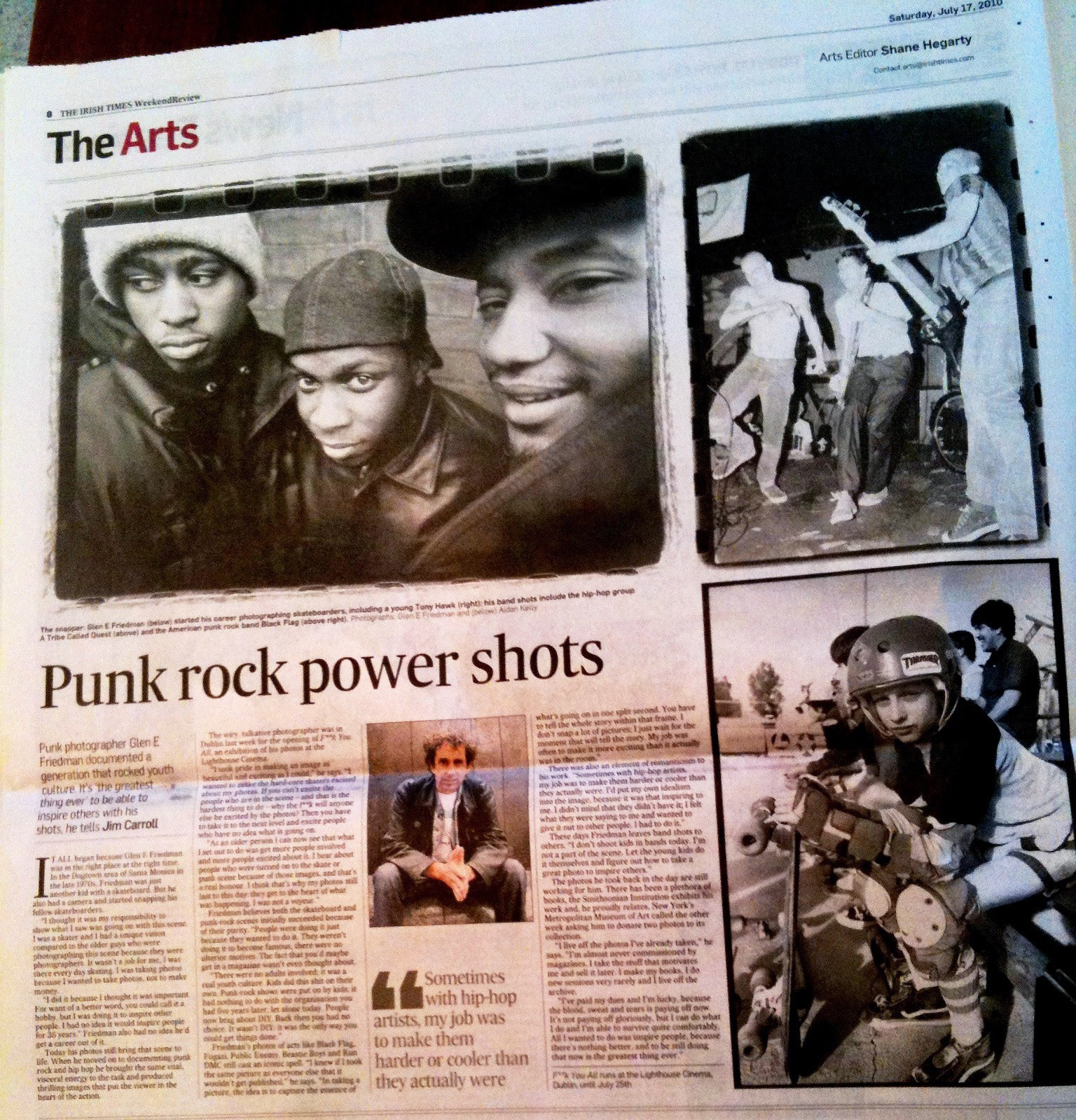 Punk photographer Glen E Friedman documented a generation that rocked youth culture. It’s ‘the greatest thing ever’ to be able to inspire others with his shots, he tells JIM CARROLL

IT ALL began because Glen E Friedman was in the right place at the right time. In the Dogtown area of Santa Monica in the late 1970s, Friedman was just another kid with a skateboard. But he also had a camera and started snapping his fellow skateboarders.

“I thought it was my responsibility to show what I saw was going on with this scene. I was a skater and I had a unique vision compared to the older guys who were photographing this scene because they were photographers. It wasn’t a job for me, I was there every day skating. I was taking photos because I wanted to take photos, not to make money.

“I did it because I thought it was important. For want of a better word, you could call it a hobby, but I was doing it to inspire other people. I had no idea it would inspire people for 35 years.” Friedman also had no idea he’d get a career out of it.

Today his photos still bring that scene to life. When he moved on to documenting punk rock and hip hop he brought the same vital, visceral energy to the task and produced thrilling images that put the viewer in the heart of the action.

The wiry, talkative photographer was in Dublin last week for the opening of F**k You All, an exhibition of his photos at the Lighthouse Cinema.

“I took pride in making an image as beautiful and exciting as I could,” he says. “I wanted to make the hard-core skaters excited about my photos. If you can’t excite the people who are in the scene – and that is the hardest thing to do – why the f**k will anyone else be excited by the photos? Then you have to take it to the next level and excite people who have no idea what is going on.

“As an older person I can now see that what I set out to do was get more people involved and more people excited about it. I hear about people who were turned on to the skate or punk scene because of those images, and that’s a real honour. I think that’s why my photos still last to this day: they get to the heart of what was happening. I was not a voyeur.”

Friedman believes both the skateboard and punk-rock scenes initially succeeded because of their purity. “People were doing it just because they wanted to do it. They weren’t doing it to become famous, there were no ulterior motives. The fact that you’d maybe get in a magazine wasn’t even thought about.

“There were no adults involved; it was a real youth culture. Kids did this shit on their own. Punk-rock shows were put on by kids; it had nothing to do with the organisation you had five years later, let alone today. People now brag about DIY. Back then you had no choice. It wasn’t DIY: it was the only way you could get things done.”

Friedman’s photos of acts like Black Flag, Fugazi, Public Enemy, Beastie Boys and Run DMC still cast an iconic spell. “I knew if I took the same picture as everyone else that it wouldn’t get published,” he says. “In taking a picture, the idea is to capture the essence of what’s going on in one split second. You have to tell the whole story within that frame. I don’t snap a lot of pictures; I just wait for the moment that will tell the story. My job was often to make it more exciting than it actually was in the room.”

There was also an element of romanticism to his work. “Sometimes with hip-hop artists,my job was to make them harder or cooler than they actually were. I’d put my own idealism into the image, because it was that inspiring to me. I didn’t mind that they didn’t have it; I felt what they were saying to me and wanted to give it out to other people. I had to do it.”

These days Friedman leaves band shots to others. “I don’t shoot kids in bands today. I’m not a part of the scene. Let the young kids do it themselves and figure out how to take a great photo to inspire others.”

The photos he took back in the day are still working for him. There has been a plethora of books, the Smithsonian Institution exhibits his work and, he proudly relates, New York’s Metropolitan Museum of Art called the other week asking him to donate two photos to its collection.

“I live off the photos I’ve already taken,” he says. “I’m almost never commissioned by magazines. I take the stuff that motivates me and sell it later. I make my books, I do new sessions very rarely and I live off the archive.

“I’ve paid my dues and I’m lucky, because the blood, sweat and tears is paying off now. It’s not paying off gloriously, but I can do what I do and I’m able to survive quite comfortably. All I wanted to do was inspire people, because there’s nothing better, and to be still doing that now is the greatest thing ever.”

F**k You Allruns at the Lighthouse Cinema, Dublin, until July 25th