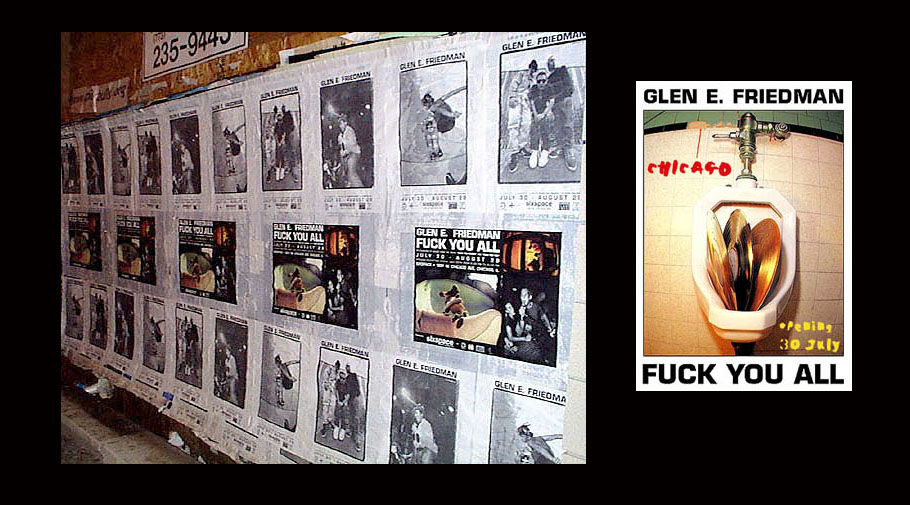 As it was, 30 July 1999, the hottest day on record in Chicago for a long long time, our curator Caryn Coleman and her husband Sean Bonner (Victory records art dept.) had worked very hard setting up their dream gallery. The place was brand new re-construction in an older side of Chicago Ave. , building and such were done with all the finest materials, amenities such as powerful air conditioning had become a given in the ‘sixspace’ as the collage of laminated images was compiled on the retaining walls in the center of the gallery, just hours before the official grand opening.

All the framed prints were already placed and hung in the most perfect sense early on, the laminates are always the toughest part, but after several attempts of configuration all fit PERFECT into the scheme . . . At 4pm on friday when all seemed ready to go, all went to their individual retreats before the opening that was planned for 6pm. In the city of Chicago it was said to have been over 115 degrees with the heat index, inside the gallery it was an amazing 65 degrees when we had left for our last rest and clean-up.

At 5:30pm Chicago experienced a major blackout – NO ELECTRICAL POWER – for most city blocks in all directions and in different locations all around . . . By 6pm people were streaming into the gallery that had only the illumination from the outside coming in through the front window to give some nice northern light to those few pieces placed near enough to the entrance that they could benefit, the high-tech lighting system that had just been installed the week before was of no use, the cool air of the space at even 6pm was quickly dissipating as the guests insisted upon viewing the works even as the sun set in the evening sky, it was now over 90 degrees INSIDE and the available light was fading fast . . .

Some sections that lost their power were slowly regaining it, grid by grid, so fingers were crossed and even more people arrived and insisted upon straining their eyes to catch a glimpse of the show even though the dark was beginning to dominate . . . people taking the time to read even the Biography placed on the wall from the FUCK YOU TOO laminated proofs seemed particularly dedicated and unfazed by the black out . . . Because that Mercury was in FULL retrograde, although this was a unfortunate circumstance it was not a total surprise, not upset, only a bit bothered, but what was one to do? By this time all the vegan treats Caryn had prepared were the only source of relief from the heat, and the lone source of light for the entire gallery was a candle on that same table of food . . . nothing anyone could do at this late hour could have helped the situation.

Sean and his friend Jon left the gallery searching for answers . . . they returned an hour later with candles and huge flashlights . . . and all of a sudden with the most minimal light even for walking around, people continued to stream through, charging in as though these lights were all that was needed, looking at the work, asking questions as though very little was unusual, the gallery had even sold out most of all the books! . . . sweating like fools walking in and out of the gallery with folks wandering around with the flashlights and candles to view the work, some STILL trying to read that long New York Press article too! and several, in for the long haul, still hoping for the power to come back on . . . any minute now, since in fact several blocks to the left and right lights began to pop up, not the gallery block though . . . drifting back and forth between the inside and out, to which ever felt cooler at that moment while not in the the middle of conversation, was about all one could do besides keeping their fingers crossed for the power . . .

By 10:45, an hour later than the planned clean-up time, we began to tell people it was time to leave, the ‘sixspace’ was still blacked out but people still wanted to view the exhibit, we expected and even announced to everyone who came through the doors throughout the night (around 500 of them) that indeed they were invited to come back anytime over the next month to view the show, but they insisted upon getting this look now . . . the appreciation of all the folks who came in was something not taken for granted . . . most everyone there was from Chicago proper, but noted in fact people had come from as far as the cities of Madison, Milwaukee, Detroit, the states of Nebraska, Iowa, and Ohio just for this show. Some folks from Australia, New Zealand and England who happened to be passing thorough this great mid-western city, were ecstatic to find out about the exhibition from the local “Reader” or from some of the many posters put up all around town . . . The power never came on until the wee hours of the next day . . .

The rest of the exhibition went without a hitch with many in attendance every day. That’s a nice city they got there . . .”