In the summer of 2004 Glen had gained permission from his long-time friend Russell Simmons to make a huge political statement in the windows of his property across the street from “Ground Zero” at the World Trade Center in New York City. Click on the image above for the story, photos, Glen’s statement, and links to press, etc., discussing the statement.

A few months ago, I approached my long-time friend Russell Simmons, who has a place on Liberty Street, with this idea: 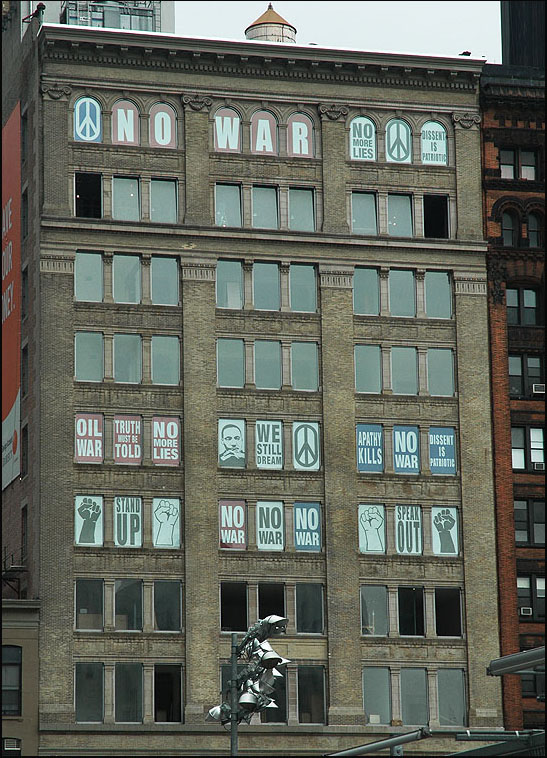 Since the original window displays went up in mid-July, thousands and thousands of visitors to the Ground Zero/former World Trade Center site have read the messages of the LIBERTY STREET PROTEST. While most visitors from all around the world and from the five boroughs are happy to read and support the positive messages, some complain that the texts are not respectful to the “troops,” or to the people who perished at the site. These critics are, deliberately, misreading the signs. 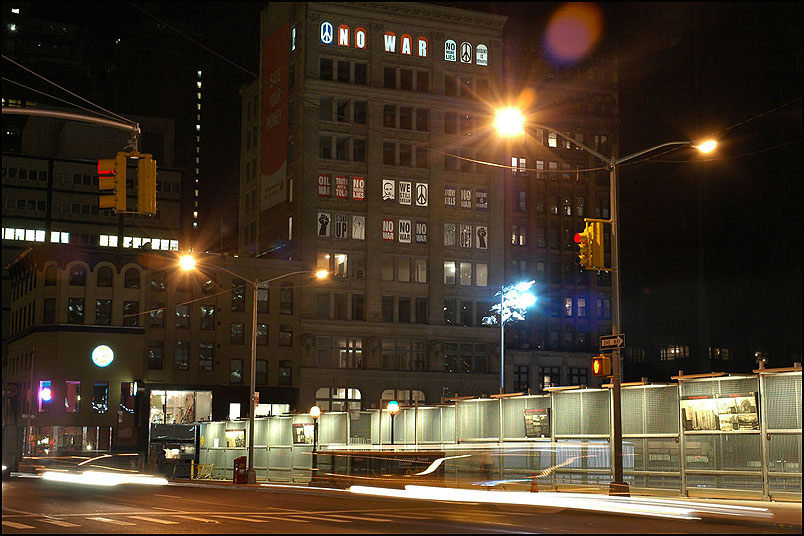 However one believes that these architectural monuments of global capitalism were “brought down”, what remains indisputable is that lives have and are being sacrificed across the globe in the name of a war machine that disrespects all life, and it is in the name of those who have perished that this government is manufacturing the war on terror. The “military industrial complex” is in full effect and imposing the fascist unconstitutional Patriot Acts on a nation of mostly unsuspecting people.

The oligarch’s agenda, which uses big business and governments to control the world’s resources, does not include the welfare of people or care of the human plight, only of their corporate profits. It is selfish and short sighted. Manipulating the events of 9/11, should not be used as an excuse for corporate gain or global domination by ANYONE. 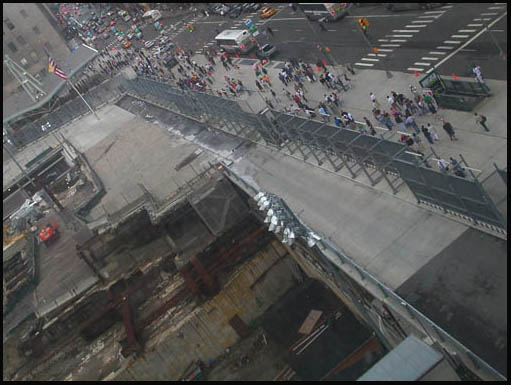 We are New Yorkers who lived through the events on September 11th 2001. We are American citizens. Our messages honor the core values of communication, love, and understanding. It is every free thinking person’s duty to speak out against these bullies who force average citizens to forget about their own worth and pride in the society they helped to create.

This protest is one example of a few folks getting together to voice an opinion, exercising their First Amendment rights. It is an opinion which has been stifled out of fear. A fear which is generated by a government that wants absolute control over it’s citizenry, when ideally it should be working towards harmony with the people. 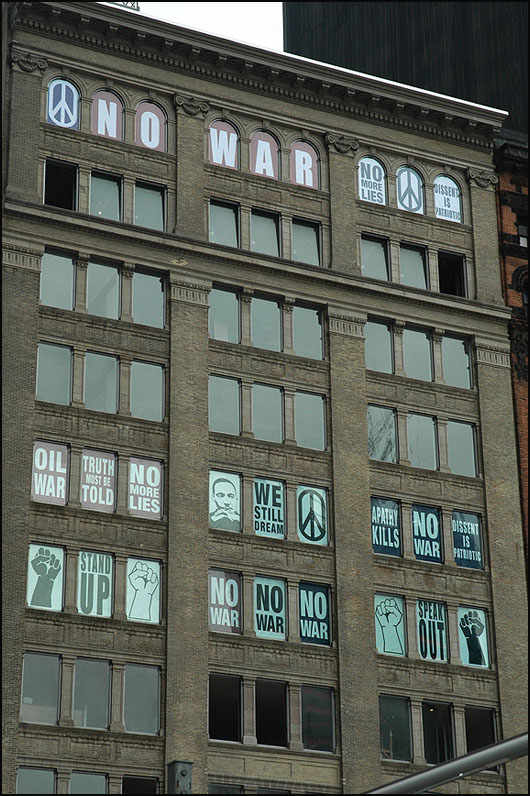 As stated in the previous notes: The current Republican administration is perhaps the most arrogant, abusive, power-hungry government that has existed in U.S. history. Most Americans can’t stand them. They “stole” the election, they are headed towards global destruction for corporate gain, and it is the responsibility of every citizen to speak out against them!

Another goal of The LIBERTY STREET PROTEST is for the president or future president to be confronted with a strong anti-war message when he comes through town. Be assured that this message is directed at any and ALL legislators, individuals, or governments who support war.

(Here’s Edwin Class, one of the guy’s who’s been down there almost every day, talking to people from around the world, voicing his opinion and sharing thoughts.) 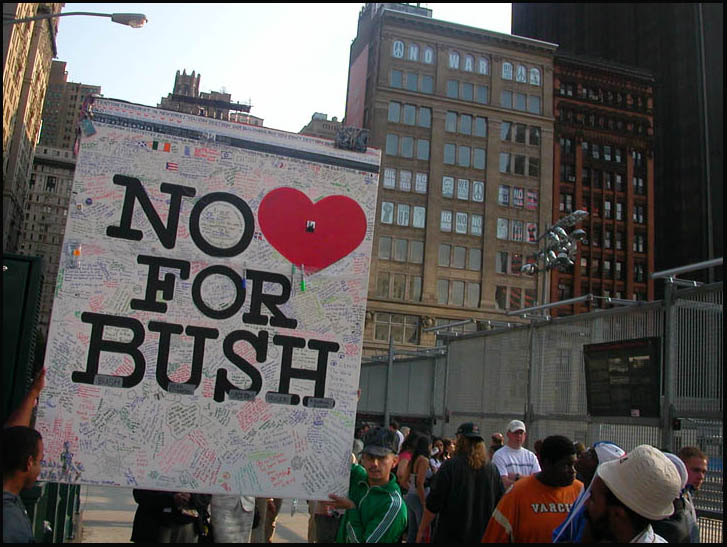 This final phase 3.3 of the LIBERTY STREET PROTEST is sure to attract even more attention to our positive messages. We encourage you to write letters, e-mails, and make phone calls of support and of peace to your local politicians, and those here in New York City especially to those who have been getting calls from right wing supporters who are afraid of dissent. If you live here, especially during the convention, we would like to encourage you to post signs in your own windows and exercise the rights guaranteed by the Bill of Rights for you to express your own views. 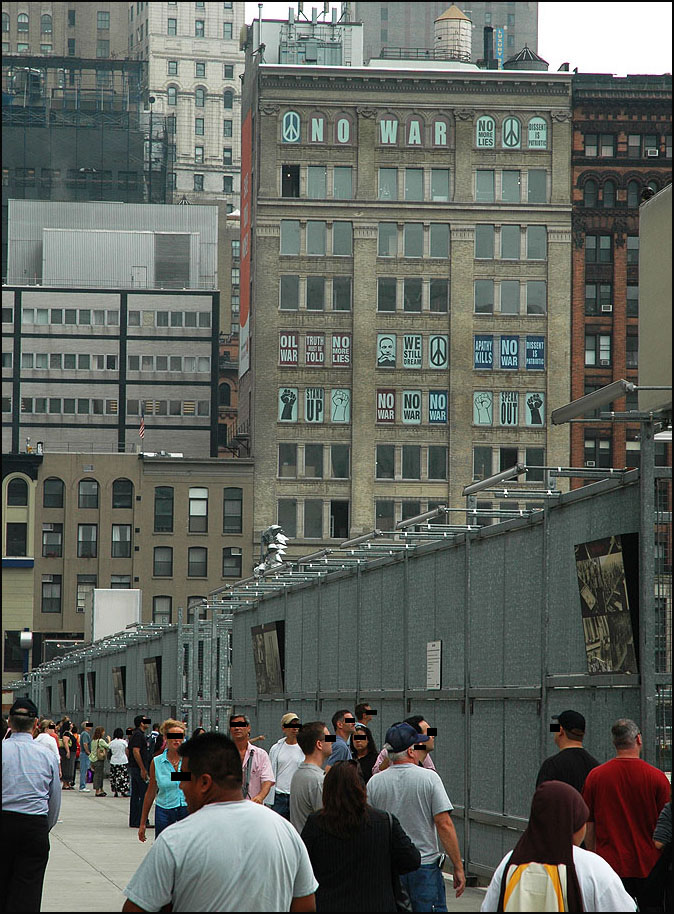 Russell Simmons, Chris Habib, Vida Dominguez, Shepard Fairey, the folks out at Monster Media, many friends, other Liberty Street neighbors, and I represent THE LIBERTY STREET PROTEST. We have all collaborated in creating this message in this most provacative location. We hope our effort inspires citizens to re-take their government and re-claim their rights, to protest for positive, non-violent change. By speaking out, we re-enforce the ideals of caring and life. 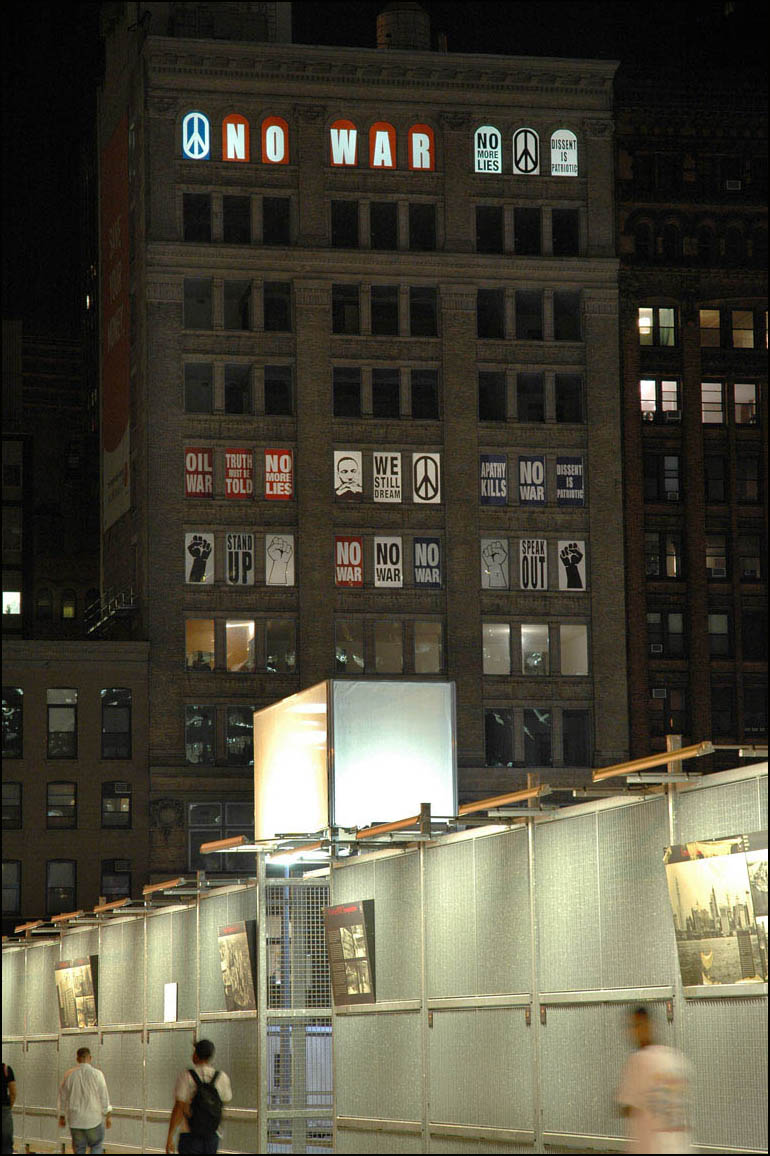