We are proud to announce the premiere MY RULES exhibition held in the Covent Garden section of London, UK,
was a resounding success, and we hope to be bringing it to further cities beginning this spring!

The exhibition was open 12pm-8pm daily

The general event info and to find out about special events happening at the gallery check on Facebook HERE.
You can also use this page to leave a comment about your experience at the Glen E. Friedman exhibition.

The OPENING NIGHT was Friday the 21st of November 2014 !
*** The show was brought to you by ATP and Givens. 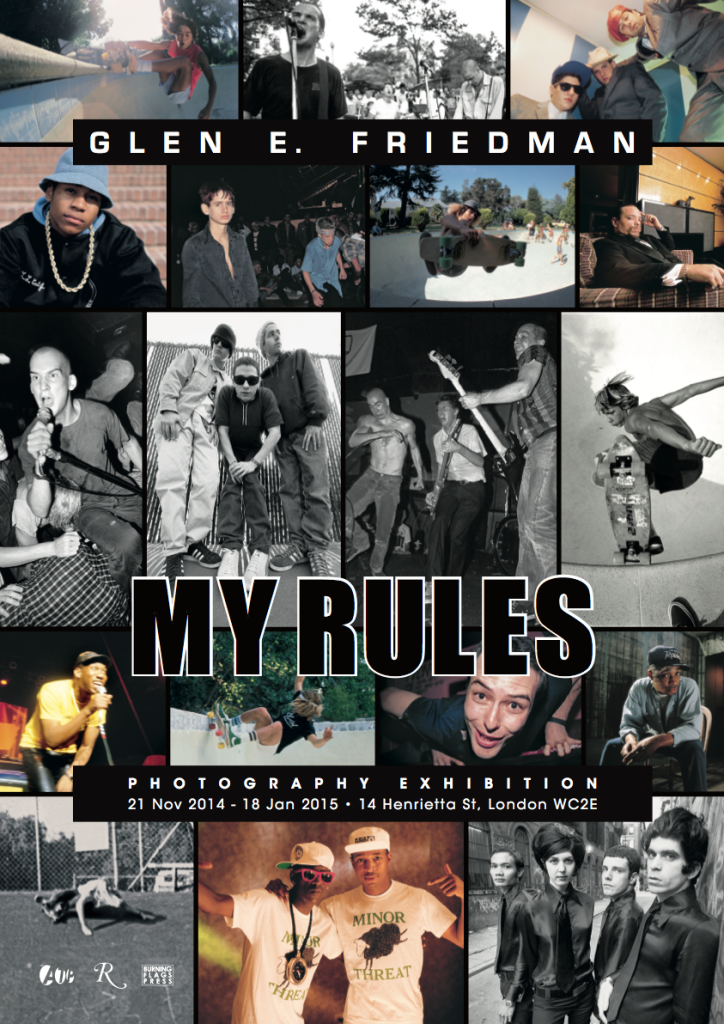 A photographic exhibition of energy, attitude and rebellion – in conjunction with the release of My Rules the book, published by Rizzoli International. Glen E.Friedman has been described as one of the most important photographers of his generation.

Think of iconic images of Run DMC, Black Flag, LL Cool J, Minor Threat, Public Enemy, and Beastie Boys, or the gravity defying, revolutionary skateboarding of Tony Alva, Jay Adams, or Stacy Peralta – It is almost certain that Glen E. Friedman was the man behind the camera. Friedman’s photographs are rich in action and intensity and have stood the test of time – many have become the definitive portraits for their subjects. Since the mid-1970s as a young teenager, Friedman has been chronicling quintessential subjects in underground and counterculture movements like no other. Capturing the pivotal and defining moments in music and street movements that were largely unknown or ignored by the mainstream. 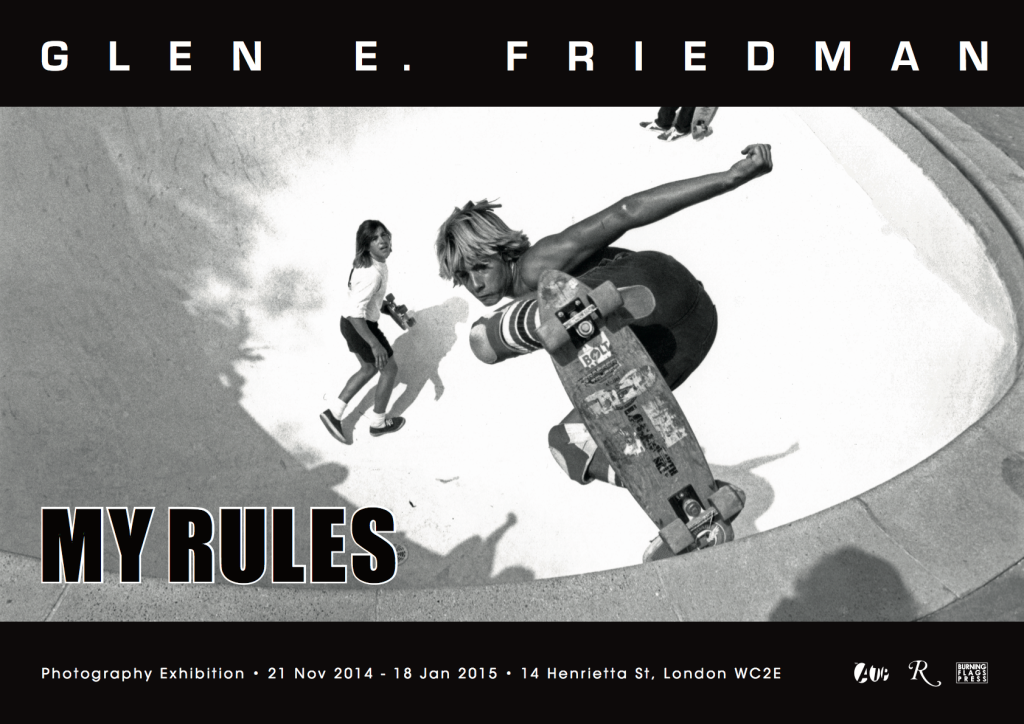 Friedman’s My Rules serves as a testament of integrity for the three powerhouse countercultures of skateboarding, punk, and hip-hop.The energy and rebellion shine through – the accompanying book by Rizzoli features over 300 images; it is Friedman’s 7th published monograph.

This exhibition comprises of over 50 colour + black and white fine art photographic prints – many of which have never been exhibited before. Classic images from Friedman’s last UK exhibition at the ICA in 1997 are also included, now printed larger and better than before. After the premiere in London, the My Rules exhibition will continue to tour worldwide. 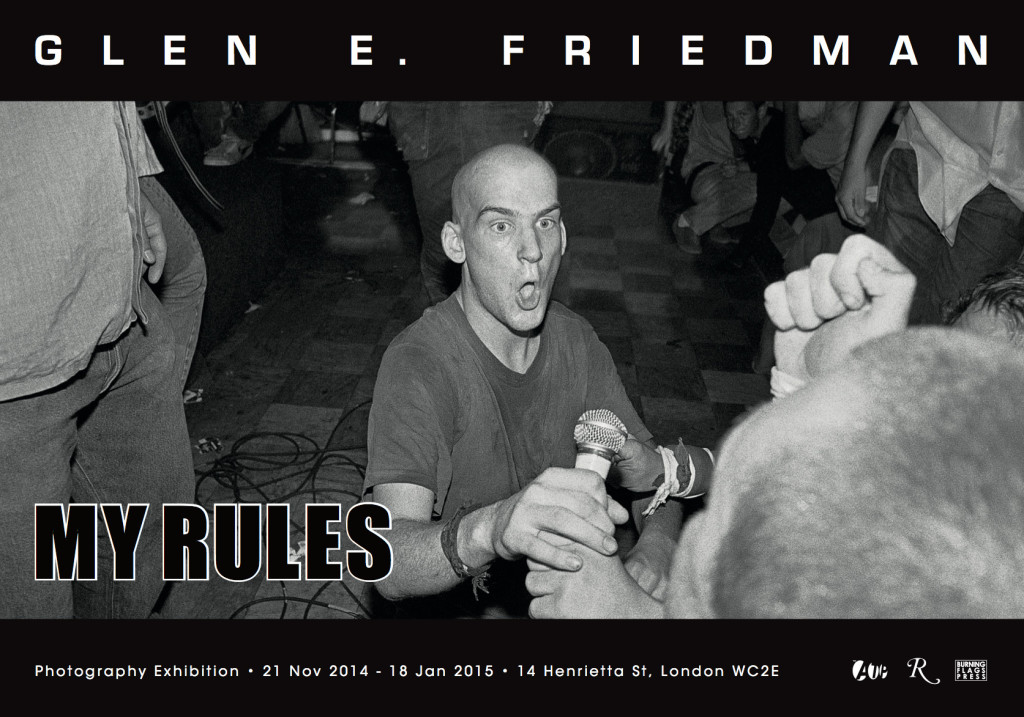 For the Rizzoli book, Friedman reached out to some of his subjects to get in their own words what it was like to be at the crux of these cultural movements; these exclusive, often revealing words serve as an education and inspiration. My Rules is not only a remarkable chronicle of beautiful images and a primer about the origins of three radical street cultures recognized worldwide; it is also an artistic statement of inspiration for generations to follow.

The exhibition included audio installations from Ice-T, Ian MacKaye, Alan “Ollie” Gelfand and an unreleased audio interview between Jay Adams and Glen E. Friedman.This interview formed the basis of Jay’s essay in the book, and was one of the last extensive interviews he gave before his untimely death in August this year. 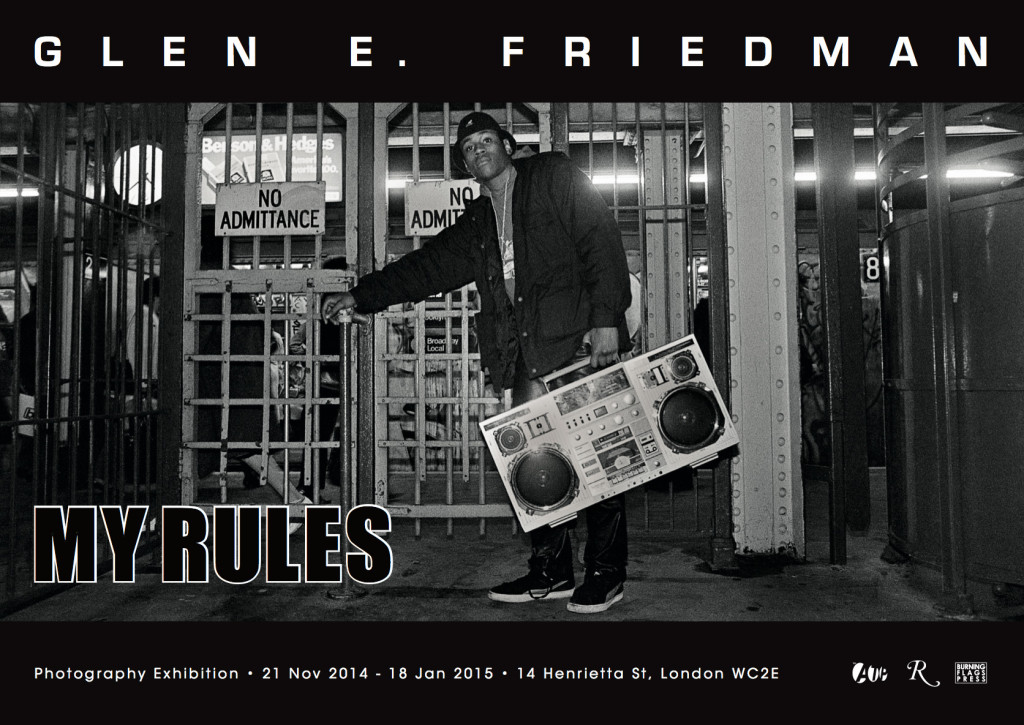 The exhibition also played host to a selection of curated films by Glen E. Friedman & followed by informative, and inspirational Q&A sessions throughout the opening weekend.

14 Henrietta St, is a building steeped in publishing history, being previously inhabited by Victor Gollancz, a British publisher and humanitarian (publisher of George Orwell’s Down and Out in Paris and London and Franz Kafka’s,The Trial) who also ran his business from the premises.